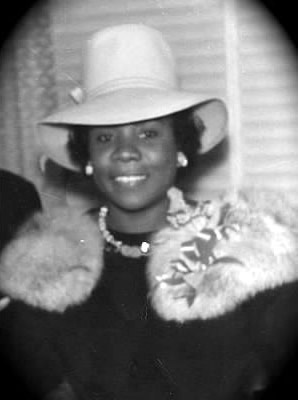 Louella Latin was born August 7, 1923 to Ida Mae Morris and Henry Giles in Shreveport, Louisiana. She attended school there. She met the love of her life, O.V. Latin (affectionately called “Willie” by friends and family). They were joined in holy matrimony. They migrated to Northern California and finally settled in San Francisco. To that union three children were born – Willie James, Michael and Anita Paulette.

She served as First Lady of the Mount Vernon Baptist Church for 38 years before she passed. She served the Mount Vernon Baptist Church as well as the San Francisco Community until her health began to fail. She served as Mission President, Youth Mission Director, Women’s Sunday School Teacher, Women’s Department District President for Northwest Educational District Association, President of the Interdenominational Minister’s Wives and Widows and she sang Soprano in the Senior Choir! She was a frequent facilitator for the California State Baptist Convention, Women’s Department Annual Serendipity.

She and her husband, Pastor O.V. Latin, opened their heart, their hands and their home to help those who were in need. She was an awesome cook and loved to entertain. She hosted several meetings for the Interdenominational Minister’s Wives & Widows, Annual Mission Teas as well as hosted and cooked for many of her Family Gatherings.

Louella received her License as a vocational nurse and worked in the medical field for many years until their youngest child and only daughter, Anita entered middle school. She graduated from Fellowship Bible Institute. She was a great humanitarian in the community. She was the epidemy of womanhood, quiet in nature and graceful in demeanor. And when she spoke, you listened! Her mantra, “Whatever you do, do it decent and in order!”

This website uses cookies to improve your experience while you navigate through the website. Out of these cookies, the cookies that are categorized as necessary are stored on your browser as they are essential for the working of basic functionalities of the website. We also use third-party cookies that help us analyze and understand how you use this website. These cookies will be stored in your browser only with your consent. You also have the option to opt-out of these cookies. But opting out of some of these cookies may have an effect on your browsing experience.
Necessary Always Enabled
Necessary cookies are absolutely essential for the website to function properly. This category only includes cookies that ensures basic functionalities and security features of the website. These cookies do not store any personal information.
Non-necessary
Any cookies that may not be particularly necessary for the website to function and is used specifically to collect user personal data via analytics, ads, other embedded contents are termed as non-necessary cookies. It is mandatory to procure user consent prior to running these cookies on your website.
SAVE & ACCEPT
Go to Top